The Beauty of Her Own Reflection

The moment the door closes the small room is cast into shadow. Acrid smoke from the cooking fire just outside the doors seeps through the cracks in the crumbling brick walls and rotting wooden door. I blink, trying to make out Sr. Carolyne’s light-colored habit as she sits directly in front of me, but for a moment I can see nothing but darkness.

It is only when my eyes adjust to this new environment that I can begin to see the people and the interior of their dwelling. It’s a mother—widowed when her husband was killed in a boda boda accident, (sadly, not an uncommon story) which also left her fourth child deaf and mute. She has five children, starting at age fourteen, all the way down to two. They’ve crowded into the room, which is only slightly bigger than your average western bathroom, and contains only a bed, separated from the rest by a dirty white curtain, and a couch and two chairs that are ripped and sagging. The chairs creak uneasily whenever we shift position, and if I put my hand on the arm a small cloud of dust rises into the air—I can smell it and feel it, but I can’t see it.

Despite the dust, which makes its way into everything here, the home is clean. The cracked cement floor is swept, and there are few belongings, but what little they do have has been neatly arranged at the base of the far wall. Sister begins speaking with the woman in Luganda, and I can only pick out a few words—the greeting, the woman is suffering, she needs food for her children—this is all I understand, but it is enough.

The smallest child, a two-year-old girl, hides behind her mother’s skirt. She has the biggest, softest eyes, and her tiny fingers stroke the faded fabric as she stares at me, enraptured with my pale skin. She wants to come closer, but she is too afraid to approach me directly. First she cautiously leaves the safety of her mother’s skirts and runs to Sister, who picks her up and lets her sit on her lap. The child stares at me still, curious, now only a few feet away.

Not sure what to do to entertain her I pull out my phone and take her picture. When I show her the photo, her eyes light up. They grow even bigger, which I hadn’t thought possible, and she reaches out to touch the screen. I motion for her to come and she slides down from Sr. Carolyne’s lap and approaches me, lured by the camera.

Later I discover almost forty pictures of her, some with me, others with just her. I can’t forget her total excitement as she discovered the beauty of her own reflection. 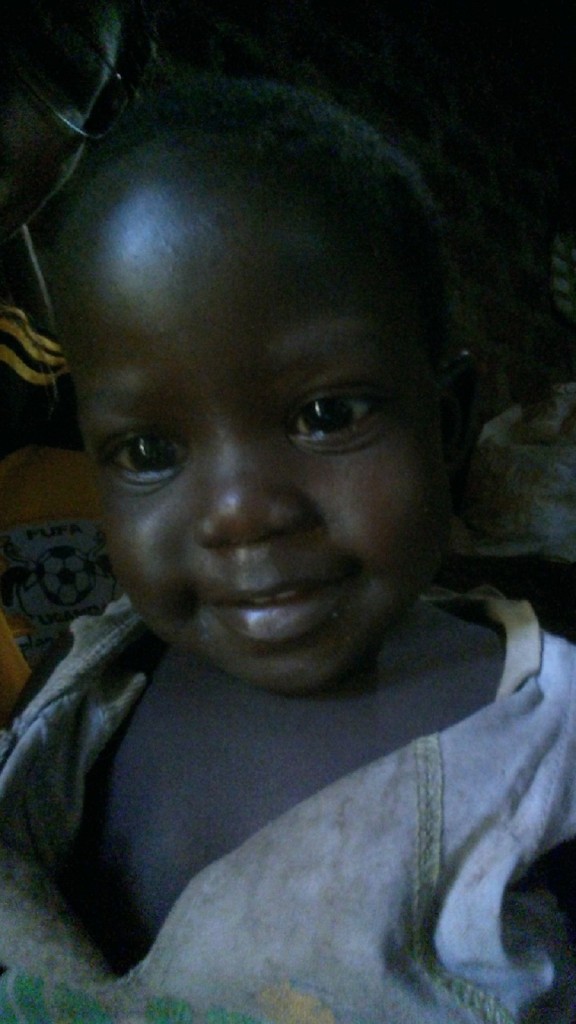 Seeing the beauty of her own reflection

Sitting there, I knew that this incredibly precious gift from God is hiding out here in this beautiful country in the midst of war-torn Africa not because God has forsaken this place and these people, but because He wants the rest of the world to seek them out.

When at last we left the house, I was reluctant to put her down. We staggered out into the light to climb up the hillside, back to the road, passing the solitary pot of beans simmering over the fire that was to serve as supper for all six. 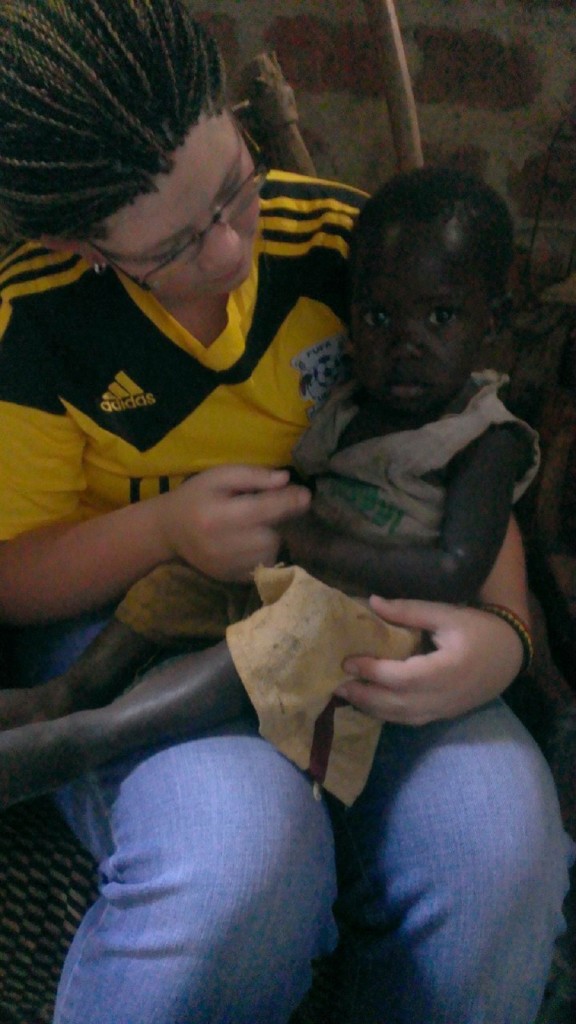 Getting to know one another

What we witnessed that day is not an unfamiliar scene. At least once a week families crowd onto our front porch, waiting for Sr. Carolyne to register them for CARITAS' child sponsorship programs in the hopes that we can find sponsors so their children can attend school. Sometimes it takes four hours or more to interview them all. People keep coming, asking for help.

The hardest thing I have encountered, though, is when people I know—not just in passing on the streets, but actually know because they are friends—come to me and ask for help. They come, sit on the front steps, take my hand…and then we sit in silence for a while, each at a loss for what to say. When the story finally comes, it is all the more heartbreaking because, much as you want to help everyone, the people you know and love are always first in your mind. What do you do when a friend looks into your eyes and tells you she can’t feed her children?

But still, I am incredibly blessed. With each passing minute I realize more and more what a privilege it is to serve. Every time I get to take someone’s hand or pick up a small child and cradle them in my arms…I am blessed. It’s a feeling you get when you kneel down in the dirt to embrace a child or shake a grandmother’s withered hand that she has used to comfort and care for not only her children but her grandchildren. It’s almost like I’ve been chosen for just a few precious minutes to hold one of the few things in this world still untouched by sin.