On Wednesday, CARITAS For Children organized a gathering at St. Anthony’s Nursery School in Nkokonjeru. Those who attended this meeting were the local guardians of children who are eligible for nursery school, but do not have the funds to support an education for their children. These guardians came with their children for interviews with CARITAS For Children. Sr. Immaculate and Sr. Lucia, who work at the local nursery school, chose these children because they saw them sitting at home or working in the fields when they should be in school. We conducted these interviews with the guardians focusing on the main question: “Why do you need assistance?” 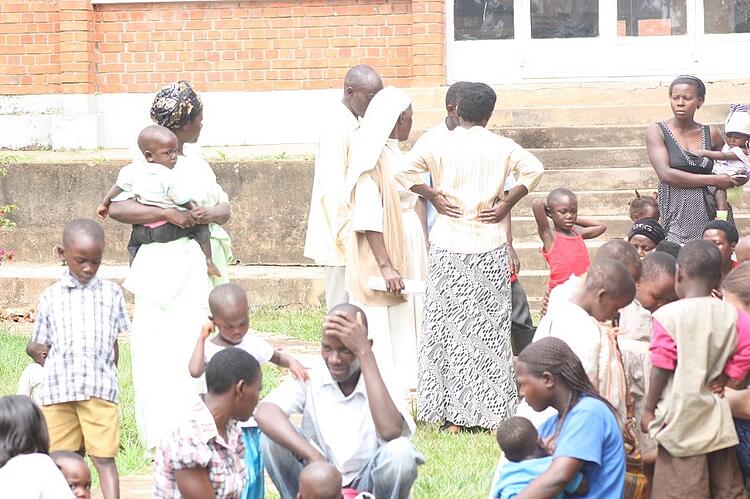 Children and their guardians gathered at St. Anthony's Nursery School waiting to be interviewed for CARITAS' child sponsorship programs.

Of necessity, these conversations have to get into very personal family issues, especially dealing with money and HIV concerns; it often feels very intrusive. Personally, one aspect of the interviews that was gratifying was that I was able to conduct the interviews using my acquired Luganda language skills.

This was the first time that I was able to ask questions like, “When did your father die?” “Taata wo yafa ddi?” or “Have you been tested for HIV?” “Olina akawuka ka siliimu?” in the local language while also properly expressing my condolences (i.e. “I’m sorry”) within the rules of Baganda culture. Although such conversations can be very emotionally taxing for both parties, the ability to communicate within the local language immediately puts the other person at ease. It shows the people of Uganda that CARITAS For Children truly respects their culture, and it also helps them to be more willing to communicate the details of their life that reveal their deep need for sponsorship.

One of the things that surprised me greatly about the interviews was that about one-third of the children that I interviewed are being raised by their grandmothers. One of the grandmothers that stood out to me was named Mutesi, who was seeking sponsorship for her grandson, Beckham. She makes a living selling a food the Ugandans call “pancakes” in the center of Nkokonjeru. 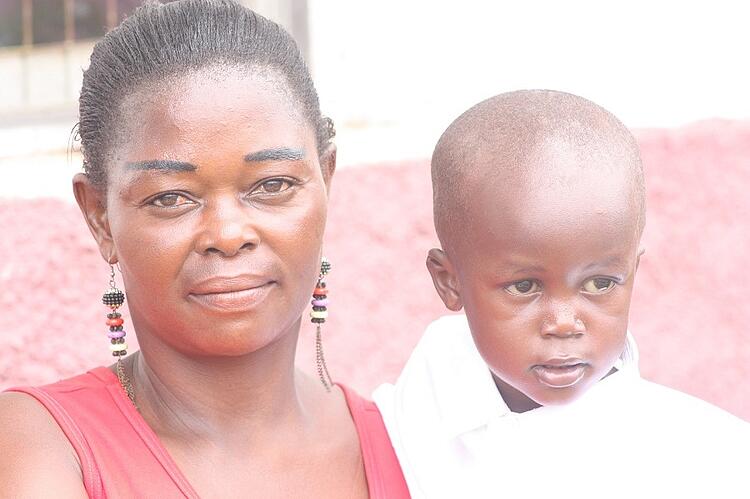 Grandma Mutesi and her grandson Beckham

Jjajja (Grandma) Mutesi is a very special woman. I could see in her eyes that there was a profound depth to her spirit, but that this depth existed as a result of her struggle through many hardships. After a bit of small talk, Mutesi opened up enough to tell me the story about how her son Aaron disappeared. When Aaron was a senior in high school, he was taken by the police during the heated presidential elections in February 2011. Jjajja Mutesi’s son was imprisoned or abducted for political reasons, and he has not been seen by anyone since that day. Unfortunately, Aaron’s son, Beckham, was born very soon after the elections finished – but his father was nowhere to be seen. Beckham’s mother, out of fear, left baby Beckham in the care of Grandma Mutesi.

Grandma Mutesi has been struggling to take care of her grandson with the little money she makes selling pancakes in town, but does not make enough money to send Beckham to school. Her eyes expressed the sadness she had for leaving her grandson at home while other kids his age were schooling. Greater than the sadness, however, Beckham’s grandmother possessed a quiet strength behind her eyes, a strength that said, “Somehow, someway, I am going to make sure my little boy goes to school.” God must have answered her prayers by sending the child to us on that Wednesday. 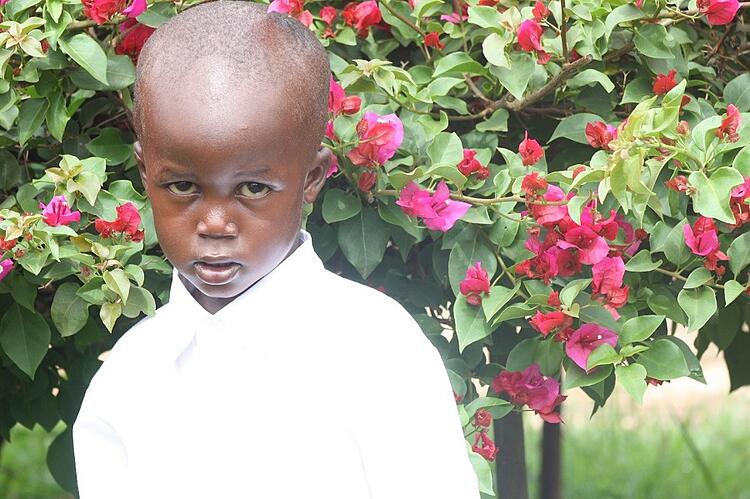 Another grandmother that made an impression on me was Grandma Nakitoma.

Immediately after meeting this woman, I could tell that there was something special to her, a resilience deep within, so strong that external adverse circumstances could be no match for her. Grandma Nakitoma currently struggles to raise her son’s five children after he and his wife died of AIDS in 2011. I could see the pain in her eyes, but also a strength and protectiveness behind this pain. Grandma Nakitoma held her grandson, Ron, with a firm yet tender grasp that assured him of the security he had in her arms.

Grandma Nakitoma does not have a form of income, other than the little money she gets from growing food on her own subsistence farm near her home. She struggles to raise the funds to send all her grandchildren to school because she desires for a brighter future for each of these young children. Ron, however, being the last-born, gets the short-end of the stick. There just is not enough money left to send him to school.

When I look at the photo of Grandma Nakitoma and Ron, it is almost overwhelming to see how deeply this grandmother loves her grandson. I see in her face the same love I imagine being on the face of Christ for all of God’s poor and destitute children. Her eyes, in unison with the heart of Jesus, convey a silent yet urgent plea: “Could you help this child? I love him deeply. Could you help my child?” It is my joy, and mission, to help others hear her quiet yet loving voice.