It is hot outside, just like it always is. The air smells strongly of moisture and sweat, filled with the sounds of children laughing and playing. Beads of sweat cover their brows, and their uniforms are damp with it. Small hands with delicate fingers in every shade of brown cling to my arm and legs, pulling at my skirt, voices begging for attention. I have a small girl balanced on my hip with one arm, and a little boy, who is successfully fighting off all his companions to defend his place at my side, clutching the other.

But there are a few children who are not following me with eager faces. Instead, they’re crowded around a window and half-open door on the other side of the courtyard, hungrily peering inside. The dining hall is just a big room like all the other classrooms, a few rugs for the children to sit on, some rickety tables for the teachers, and a bench where all the kids pile their things when they arrive in the mornings. Every day the kids are given porridge at around 11:00 a.m., to help them make it through the rest of the day. Most of the parents don’t pay the school fees in full, and there are other children who are there purely out of charity, never paying a cent. Porridge is all the school can afford to give them. Just enough to fill empty stomachs, at least for a little while. 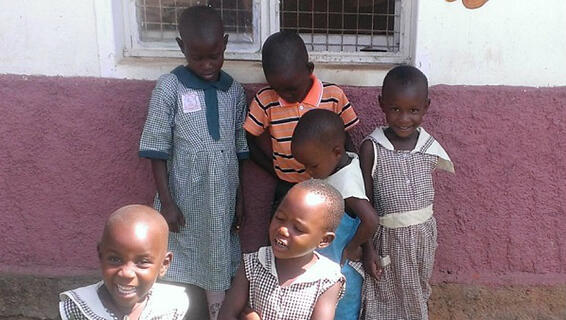 Some children are too hungry to play.

The children are crowding around the door, waiting to be fed. They haven’t eaten breakfast, and probably ate little for supper the night before, if they were lucky enough to get it. One little girl stands out in particular, partly because she is older and taller than the other kids. She is sick, and desperately needs a kidney operation, but her mother can’t afford to pay it. The mother is a single parent with three kids, and two of them attend the nursery school only because of the kindness of the Sisters. They never pay a shilling. Not even one. She only has one dress, and it’s old and torn. She’s so thin, and walks to school on an empty stomach, waiting for the small serving of porridge she will be given half way through the day.

She’s hungry. So she stands outside the dining hall, hoping for a glimpse of the food. When it comes time to eat she sits down right next to the table that holds the bowls of porridge and stares intently at it, never looking away, hardly blinking, until her bowl of porridge is safely in her hands. Then she carefully eats it, holding it as if it is a treasure, not wasting a drop. 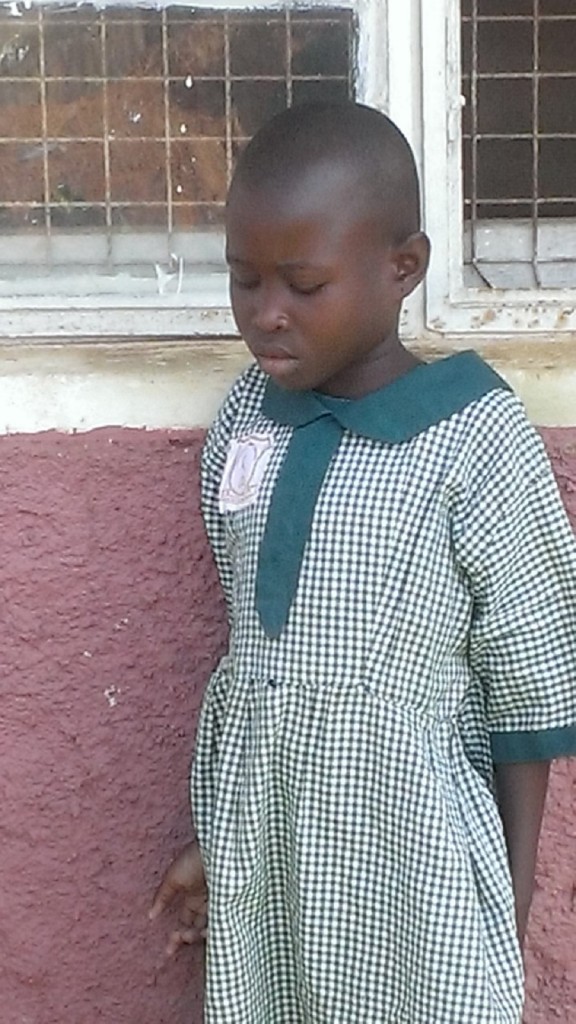 Waiting for her meal

I stand in the blistering sun, dripping with sweat, mobbed by children crying for attention, painfully aware that the little girl only a few paces away is hungry. And she’s not alone. There are so many hungry children. How can I ask them to pay attention in class when their stomachs are empty? But without the education, how is there hope? If they don’t go to school they won’t be able to get a job, and then their children in turn will be hungry. Poverty is a vicious cycle. The problem isn’t feeding just this one child, or these few who are standing by the dining hall, but feeding all of them. I can feed one or two, but I can’t feed hundreds. To break this cycle they have to be able to feed themselves, and in turn their children. If I give her food today, she will be hungry again tomorrow. That’s the nature of the beast. Luckily, this little girl has a place in the hearts of sponsors in the U.S. who have decided to support her through CARITAS' chidl sponsorship programs. This ensures that she receives a quality education, school uniform, supplies and stays at school to be fed so she is not so hungry. Her life is about to change in the most incredible way.

Many of the families here are poor. Dirt poor. The kind of poor that means the kids have one or two sets of raggedy clothing, only one meal per day, and a hand-built, rundown house. I had the privilege to visit the home of two of my students at St. Anthony’s Preschool (that of the little girl who waits outside the dining hall and her sister). When we arrived, the family immediately offered us food and drink, honored to have guests visit their home. The mother was especially moved, expressing her emotions in Luganda by saying she had no words to describe how touched she was that her daughters’ teacher loved them so much to come visit them. This woman is trying to raise her children in poverty, and it is often a struggle—before sponsors chose to help her children, they attended St. Anthony’s out of charity, not even being able to pay the half price fees they were offered. 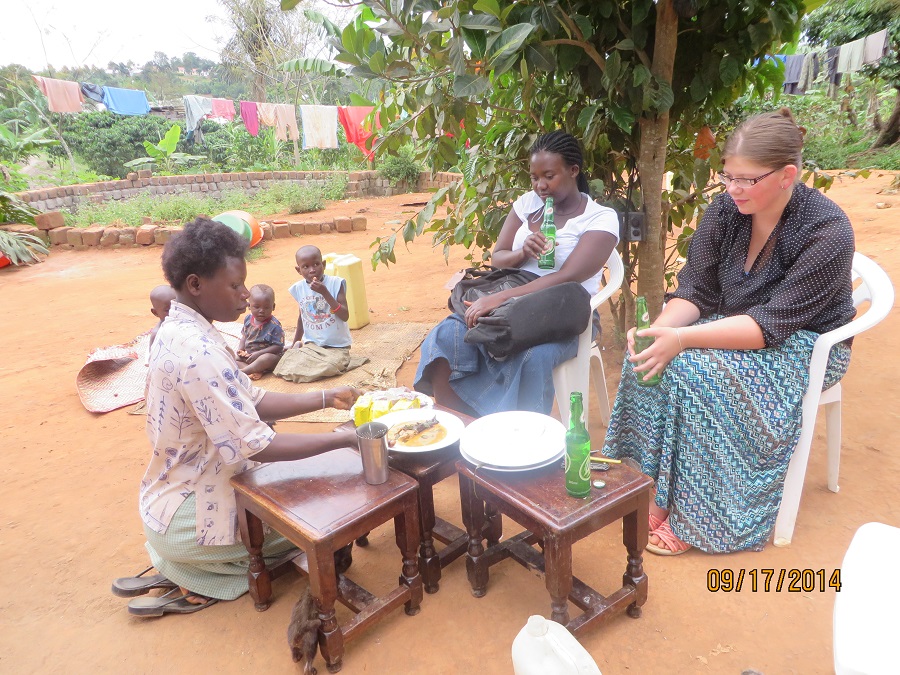 Flavia and I are treated as honored guests.

But she didn’t give up hope. She didn’t despair. She didn’t forsake her faith. Instead she prayed. She prayed for sponsors for her children, and she kept working, desperately trying to make ends meet. It’s inspiring to meet people with such faith, but even more so to see it come to fruition. Though they do not prosper, they have survived, and their faith has sustained them. And I love seeing the kindness it has instilled in them. There’s no bitterness over what they could have—should have—only caring hearts because they know what it is like to go without. 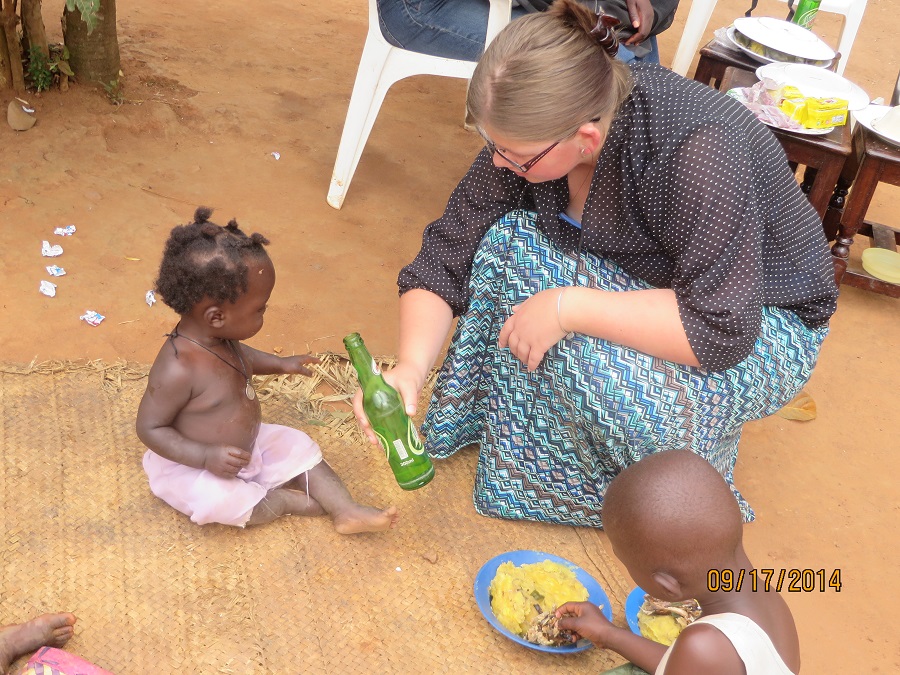 As we were sitting in the afternoon sunlight, I watched one of my students, who is about five years old, feeding her baby brother. Her plate was set before her, and I know she was hungry, but before she took a bite, she took some and gave it to her brother, feeding him before she fed herself. This little girl put her needs aside to tend to someone else’s. I’ve never been more proud of her.