In Nkokonjeru, Monday is market day. People come from the surrounding villages to sell produce, clothing, handmade items, and to buy provisions for the week. I’d never been to an outdoor market before, so I was curious what it would be like, and I have to say that it has far exceeded my expectations.

I went to the market with Sr. Carolyne, our Program Coordinator in Uganda, around three o’clock in the afternoon—I’m told that the market is at its busiest after five, but it was busy enough when I was there!—and lo and behold, there were people everywhere. Some were selling pineapples, limes, cabbages, and tomatoes, others various items of clothing such as shoes, shirts, skirts, and dresses, and yet others were selling motorcycle parts for the Boda Bodas. I met a woman who was selling handmade purses and bowls for 4,000 UGX (Ugandan Shillings) so I bought a red purse. It looks to be made of woven reeds dyed in red and blue. The handiwork is amazing! I have to admire the skill and dedication required to make such beautiful things.

I’ve learned so many things in just a few short days while here in Nkokonjeru, and much of it I never expected to learn! Such as how to work a generator, as some of the power line poles have been knocked down, and we haven’t had power save for one night while we wait for them to be restored. Usually, Flavia, our house mother who cooks, cleans, cares for, and guides all of the interns and volunteers as we learn about this culture and language (the town folk call her “Mama Muzungu” since she is always seen with a Muzungu), calls a friend to come and start the generator. But one night, we couldn’t find anyone who could come and start it for us. So I picked up the generator, which is small but quite heavy, hooked it up to the power cord, fiddled with the switches, and yanked the cord five or six times until it sputtered to life! And just like that we had power. I’ve also had to learn how to clean the water filter so our water stays clean and potable—luckily it comes with an easy to read instruction sheet.

The day after we went to the market Sr. Carolyne took me out to one of the villages, called Maseke, to interview a young boy for our Catholic child sponsorship program. It was a long, hot walk along dusty roads, and Bodas kept whizzing past us as they always do, kicking up dirt into our faces so that it burned our eyes. Eventually, we turned off the main road and onto a small dirt path that led into what I can only describe as a miniature jungle. The red dirt path led us down a small hill, past a small garden of potatoes and a jungle-like field of banana trees and sugar canes. We reached the home, which was made of handmade red bricks with a cracked wooden door with shutters to match. There was a goat tied to a post, and a few ducks and chickens pecking their way about the yard. Despite the animals running free, the place smelled only of rich Ugandan earth and fresh green foliage, punctuated by the sweet smell of decaying plants. 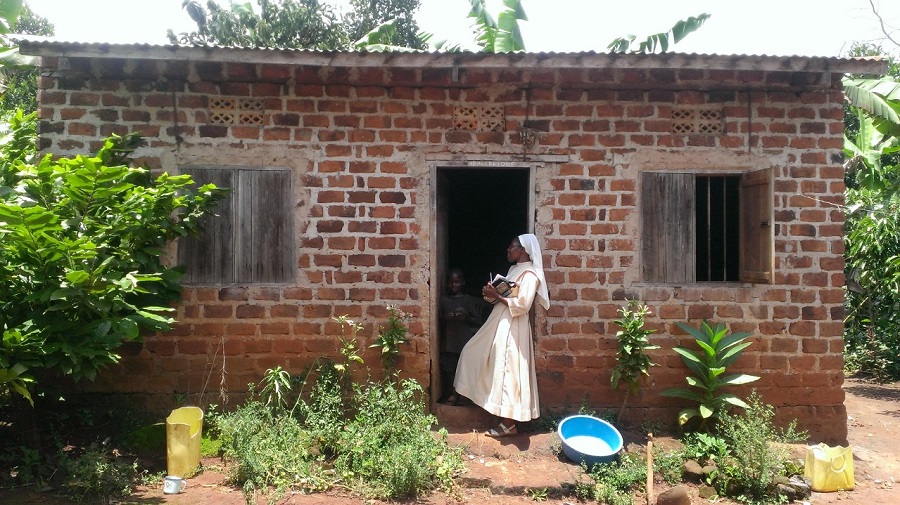 At the home we met a mother raising four children of her own as well as the boy we came to interview who is the orphaned son of a relative. The grandmother of the children, who helps to care for them, was also there. The five children were dirty, wearing clothes badly in need of a wash, and in some cases, total replacement. After a little while they overcame their shyness and approached to say hello.

The custom here is for children to kneel when they say hello to adults or persons of authority, I think it is a way of showing respect, but it takes some getting used to. They all approached me, knelt in the dirt, and shook my hand saying “good morning.” I crouched down to say hello, taking their outstretched hands and asking their names. They mumbled something half in English half in Luganda that I couldn’t make out, but what I have found is that smiles and laughter are universal languages. When I smile and wave, or offer my hand for a handshake, it doesn’t matter what language I am speaking in, we both understand that I am offering friendship. And laughter, even though we can’t always understand what the other is saying, is a very simple and effective way to communicate happiness.

Madeleine with Daudi, center, and his cousins

The little boy we had come to interview is named Daudi. According to his caretaker (who I believe is his aunt) he is eleven years old. I was shocked. This little boy, who is shy at first but smiling and mischievous once he is used to you, is the size of a seven-year-old. As a child he had TB, but was treated and is now said to be fine. We are hoping to find a sponsor for him so that he can go to boarding school in Namilyango and receive healthy meals every day and care from the Little Sisters of Saint Francis. 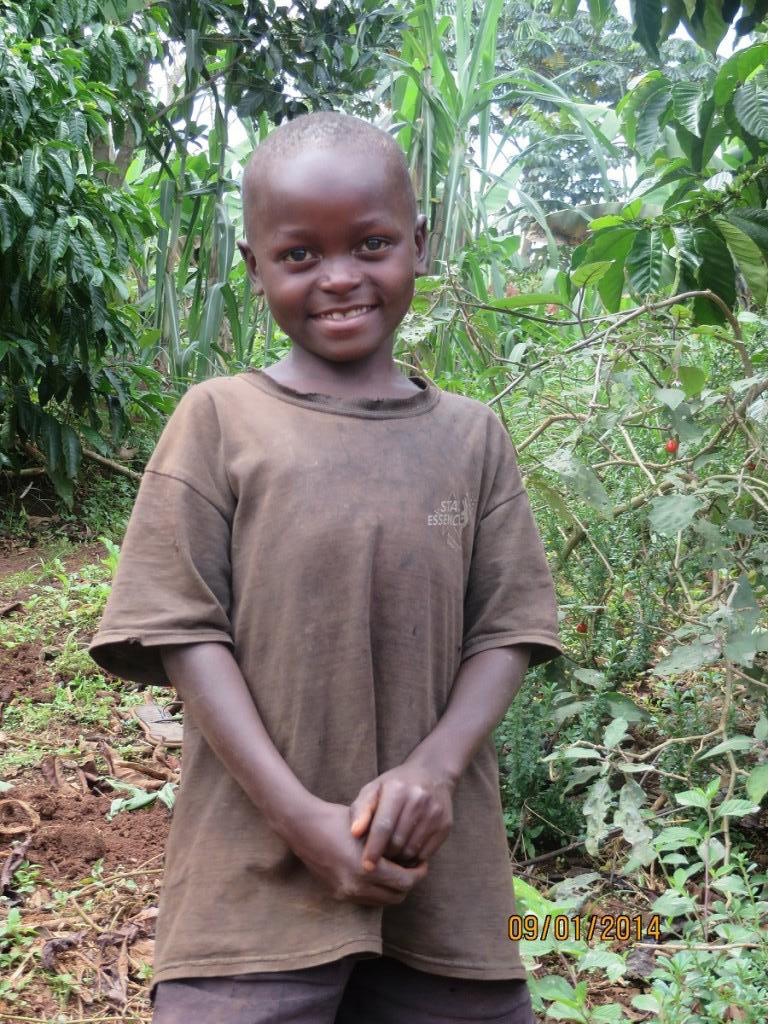 This is Daudi. If a sponsor is found soon, he'll be able to start at Uganda Martyrs Junior Boys School in Namilyango in time for the new school year.

Finally being here in Uganda, after working for so long to be here, is like being in heaven. Everyone I have met has been so kind, and they love to teach me new things and are very patient and encouraging as I try to learn Luganda. The landscape here is almost the most incredible thing I have ever seen, but more astonishing than even the view is the poverty, and the way the people here endure it.

Endure is the wrong word. The men, women, and children I pass on the roads here are very poor—their houses are small and crumbling, often dirty, their clothes are rags, and the children are thin and often hungry. It’s a stereotypical poverty, but far too much the reality here. What has surprised me though, is not the poverty, because in many ways I was prepared to see it before I came, but it is the way everyone lives through it.

These people have the most incredible faith I have ever encountered. They are happy. They smile and laugh, and have the most generous hearts. When we visited the family in Maseke they sent us home with jackfruit and sugar cane, wanting to give what little they have. (You can imagine the stares I got as I walked along the road carrying two big rods of sugar cane in the mid-day heat!) Instead of despairing in their faith that God has forsaken them to a life of poverty, their faith thrives—they depend on God, and they believe with a faith so sure that I believe it can withstand anything. Before I came, Scott Sroda, our Field Coordinator this past year, (whose blog posts you have read), told me that I would come with the mindset of helping everyone I met, and would realize that instead of me helping them, they will help me. He was right.

What this land lacks in economics and political power, it makes up for in faith. Every day I am learning so many new things—I’m like a child, asking what this food is, how you eat it, what is that thing over there, what does it do—and my questions are answered with patience. Everyone I have encountered has smiled, said hello, and shared their happiness in a way I had not anticipated. Despite poverty, there is much joy and love here, and I think that where there is joy and love, there is faith built on the strongest of foundations.