What You Should Know if You Sponsor a Child

"The sponsors should know that what they are doing – it is not just a one-time sponsorship, but it is a lifelong relationship, [by] which they themselves are transforming those individuals into becoming human persons that they never would have been." That's the message Mother Anne Nasimyu, superior of the Little Sisters of St. Francis of Assisi, said she would like to convey to every CARITAS sponsor.

The Little Sisters of St. Francis of Assisi (LSOSF) are the ministry partners with whom CARITAS For Children works to provide for the needs of poor and marginalized children through its child sponsorship programs. Mother Anne, as she is referred to in her position as head of the order, coordinates the activities of all of the Little Sisters in Uganda, Kenya, and Tanzania.

"The child is a very vulnerable individual today in Africa," Mother Anne said, "Many of them are being orphaned due to their parents passing away from HIV/AIDS related problems. Many are left on their own. Those who have their grandparents, the grandparents take them on, but it is very difficult for the grandparents to give them the care and support that is required. You'll find that these children sometimes have to fend for themselves." 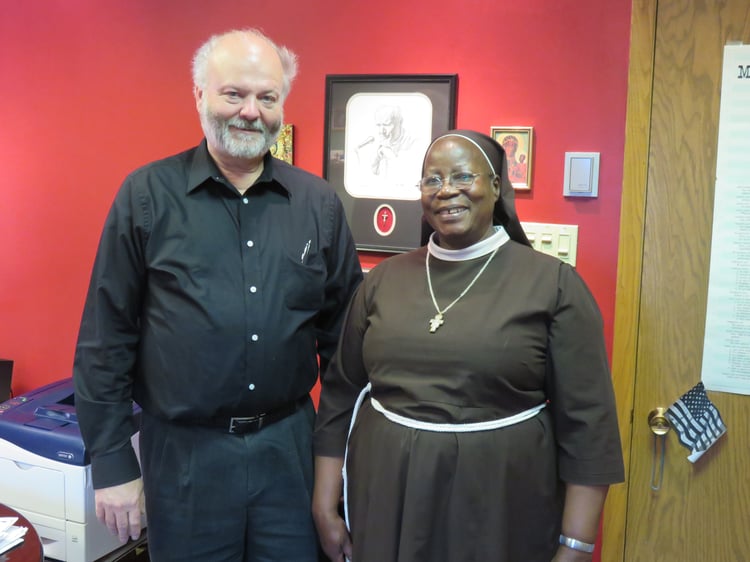 Mother Anne Nasimyu, LSOSF is the superior of the Little Sisters of St. Francis of Assisi. The Little Sisters are the ministry partners of CARITAS' child sponsorship programs in Central Uganda and Kenya. She met with CARITAS For Children's founder and Executive Director, Chris Hoar, in Milwaukee recently.

Mother Anne said if one travels to cities like Kampala or Nairobi there are so many children on their own. When the parents of a child pass away and there is no one to hold onto their land, others come and send them away. With no place to go, they live on the streets.

"Indeed we have not been able to care for all of them," Mother Anne lamented, "It is just like a drop in the ocean. We try to see whenever we can to get the children off the streets, but we know there are more coming."

Mother Anne says the girl-child is particularly disadvantaged. As early as seven years of age they are already going out to work as house girls. People want to use them; some relatives of orphans have given a girl away to work. She is not paid, but an uncle or someone else collects the money. Human trafficking also is a problem for teen girls who are lured with the promise of employment of a better life and are then sold into slavery.

"Traditionally, we love children and they are protected, but when the parents are not there, they become an economic burden to their aunts and uncles who have their own children."

Mother Anne said she believes CARITAS sponsors are making a signficant difference for the children in our child sponsorship programs. "CARITAS is empowering us to empower them," Mother Anne said, "We know for sure that with the education, it's going to make a difference in their life. Lately we have some who have graduated and they are working. That is a big difference! That child would have never gotten that education or that kind of job she is now having."

The Little Sisters also have intitiatives to empower the communitiy as a whole. One of those projects is a program for single mothers to improve their lives by learning to raise egg-laying or broiler chickens that will evenutally be sold.

"It becomes a project that is helping to make the family better," Mother Anne said, "There is protein for the family, nutrition is good." Besides providing a source of food, when the mature chickens are sold, new chicks can be purchased and the process becomes self-sustaining.

"When those sponsored children are coming back into a community which is being helped like this there will be transformation. Life will be different."

Through the cooperation of CARITAS For Children's child sponsorship programs, the people who open their hearts to sponsor a child, and the mission of the Little Sisters, "Together, we are touching life," Mother Anne said.