Justine: A Story of Loss & Hope

At CARITAS, we hear many stories. The Field Coordinators at each of our locations are constantly providing daily updates that pertain to the status of our programs, as well as any special-need cases among the students. We approach each story that crosses our desks with care, drawing confidence from past experience with students that completed our program and raised themselves up out of disadvantaged life circumstances. And, although we know there are many who still need our help, we have faith that the optimistic stories of our successful children will reverberate notions of hope and perseverance through the communities in which we serve.

The following is a story that recently crossed our desks. Needless to say, it inspired us to spread the Good News of God's Love and the impact it can have on young people in need. 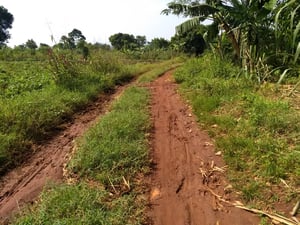 The muddy, red-and-brown-colored country road stretched ahead and behind Alon for miles. Dirt and suffocating dust kicked up from underneath the wheels of his Boda-Boda, or motorbike, as he sped around another corner, unsure of exactly where he was going. He was born and raised is Uganda, and his time as Field Coordinator of CARITAS' Uganda location has provided him some familiarity with this region, but he rarely travels this far into the back-country. The dirt road he follows winds through vast countrysides and dense jungles, and in the midst of it all--somewhere--is the young girl he is trying to find.

Her name is Justine. A 15-year-old CARITAS Day-School student who completed her Primary-level classes, she disappeared just a few days ago.

It takes a village to raise a child, Alon ponders silently, as he speeds along the road towards another far-off community where the missing child, Justine, was said to be seen. A village indeed. Justine had come to Alon for help days earlier, while she was living with the sister of a friend from school. However, the sister's home is six long miles away from the Day School that Justine attends, and the walk is truly too dangerous to take regularly. This is when Justine sought out Alon, hoping that CARITAS would have the faculties to aid her situation. When Alon asked where Justine's family was in all this, the answer he received was heart-breaking, to say the least.

Justine's father walked away from the family eight years ago. He left behind a mother and five children, most of whom were not yet old enough to fend for themselves. Then, in December, Justine's mother took her youngest siblings and their only mattress and left their home. To make matters worse, Justine's eldest sister was the next to depart, moving away to marry a man from another region. She did promise to bring back food and money to buy whatever necessities that Justine and her last remaining sister, Doreen, lacked (which was just about everything). That lasted a little while, but Justine's new brother-in-law did not make enough to support herself, Doreen and their older sister, so the aid soon stopped.

Justine and Doreen continued to live together until Doreen found a sponsor and was able to attend a Boarding School program in Nkokonjeru. Doreen moved into the school's living facilities, excited at the prospect of three full meals a day and a safe place to sleep. But Justine was left behind. Now with no-one to care for her, she attended Day School to receive her only meal for the day--that which is paid for by her CARITAS sponsors.

Although she had a sponsor, Justine left town after seeking help from Alon. Alone, she traveled down precarious red-dirt roads into the distant villages of Uganda where she might find work sowing the fields, selling fruit, or doing anything else she could do to support herself.

So Alon speeds along after her, praying to God the entire way that He would shed light on the path. Following the words of villagers who claimed to have sighted her, Alon travels deeper and deeper into the Ugandan back-country. He finally arrives at a village that is miles away from where he started his journey in Nkokonjeru. The Village Leader told him that an outsider of the village had been spotted wearing black, wandering around the town, looking for work and a place to live. It is Justine indeed, and Alon reaches her before she thinks of moving on. Although she tells him she no longer wants to go to school, he is able to convince her to climb on the back of his boda-boda and return home, to where she is known and cared for.

The journey back was difficult with multiple people occupying one motorbike, and Justine maintained her stance on not returning to school even after they arrived. After hours of one-on-one counseling and spiritual discussion, Justine agreed to return to the CARITAS program, and Alon knew he would somehow have to increase her sponsorship to include Boarding, so she would have a place to stay. Her landlord had evicted her from her family's home due to four months of unpaid rent.

The love that Justine's sponsors have for her triumphed in the end. After agreeing to increase her sponsorship to include Room & Board, they were adamant that Alon pass on a message to Justine: that they are very happy to support her to be in the Boarding School Program, that their entire family are sending her lots of big hugs, and that they are her family too! 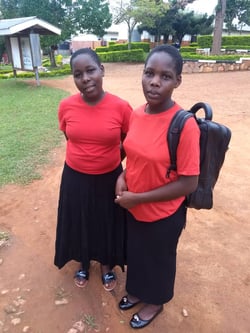 Justine was re-united with her sister Doreen, and they now are able to sleep in the same room at the Boarding House in Nkokonjeru. With the help of her sponsors, Alon's heroic acts, villagers across central Uganda and CARITAS' Boarding School Program, Justine has hope for the future, which is an utterly new experience & emotion for her.

Justine's story is one of both dreadful loss and trans-formative love. Love yields hope for the future, and hope is infectious. It can permeate a village, a nation, or an entire global community. It can shed light in places of darkness, spread truth where falsehoods reign, and raise up those of God's children who have not the means to raise themselves. It is our only miraculous faculty--to love one another the way Christ instructed, to proliferate His message of God's Love...caritas.

The following is a video of Justine in which she expresses her gratitude towards her sponsors as well as CARITAS.