After enjoying the music blasting from Stella Maris Primary Boarding School for a few hours, I decided to walk up to the school to see what was going on. To my surprise, the whole school was out dancing on the common grounds, with a DJ at the top of the school stairs, and trophies and cake on a table out front! 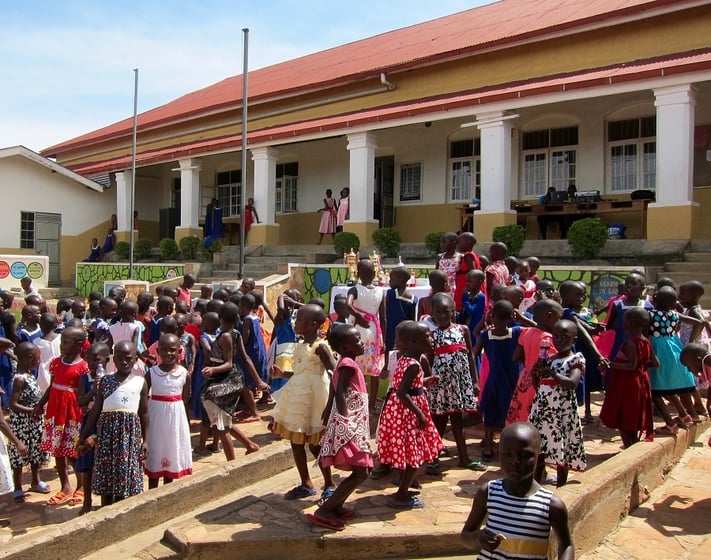 The whole school was out dancing on the common grounds, with a DJ at the top of the school stairs. 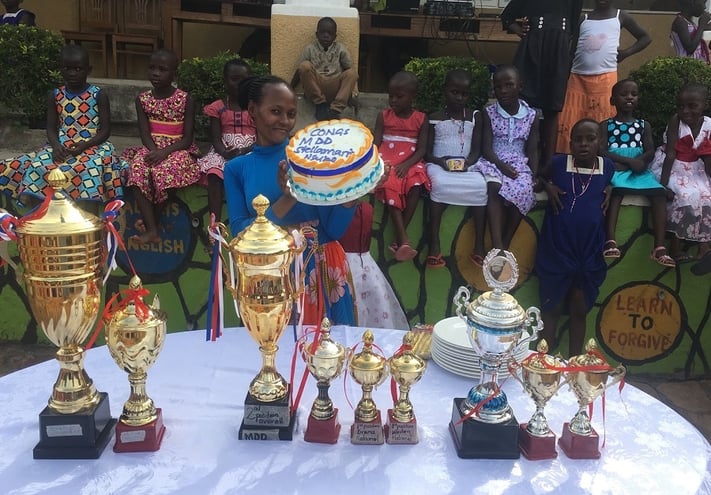 Teacher Prossy shows the cake made to celebrate and the trophies won by the students from Stella Maris Primary Boarding School at Uganda's National Music, Dance, and Drama competition. Several girls who are able to attend school at Stella Maris through CARITAS' child sponsorship programs were also members of the choir and dance and drama companies.

Learning some new dance moves with the Stella Maris girls.

As I approached cautiously, a few girls in Primary Four spotted me, and came running over and pulled me onto the dance floor. My 5-foot-7, stiff Muzungo dancing definitely stood out among the incredibly rhythmic and coordinated girls, but they all took turns dancing with me and teaching me new moves.

After taking a break to sit and catch my breath, I was told by a teacher, Prossy, that Stella Maris had placed second out of the 36 schools that competed in Uganda’s National Music, Dance, and Drama Competition at the end of Term Two. They chose this past Sunday, when everyone was back on campus, to celebrate!

Several girls who are able to attend Stella Maris thanks to the generous support of their sponsors were among those students fortunate to participate in the competition. So when you choose to sponsor a child through CARITAS For Children's boarding school program you may be offering a girl not only an education, but a chance to excel in the arts as well.