“I will give you shepherds after my own heart.” (Jer 3:15) In these words from the prophet Jeremiah, God promises His people that He will never leave them without shepherds to gather them together and guide them. The Church, the people of God, constantly experiences the reality of this prophetic message and continues joyfully to thank God for it. In Uganda today, the number of young men desiring to serve God as priests has risen. Every year over 300 young men apply to be admitted to the Major Seminary, but only 150 young men are received for formation.

One of the causes of this reduction in the number of applicants and those admitted, is the lack of the necessary seminary funds to cater for the tuition and the seminary requirements. Many cannot even make it this far, due to lack of funds. They drop off while still in the Minor Seminary due to the high cost of Minor Seminary education. 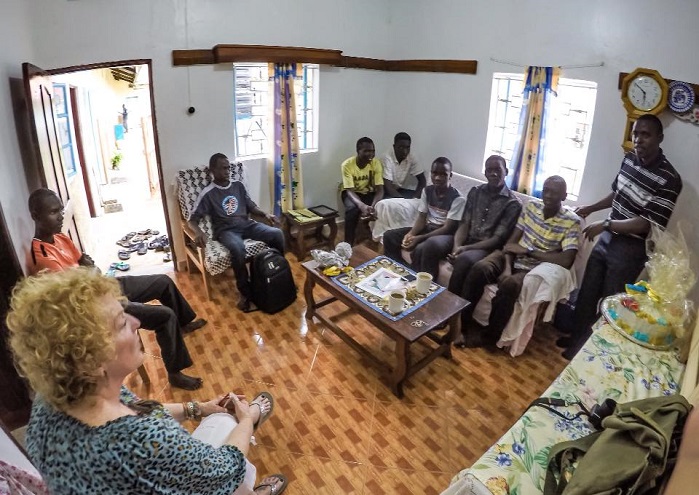 I am on the right, with a group of young Ugandan seminarians visiting with an American volunteer recently in Nkokonjeru. With me were seven major and minor Seminarians from St. Mary's National Seminary in Kampala. Two others besides me have sponsors, but four of the Minor Seminarians; Edward (16), Joseph John Paul (15), Lawrence (17), and Michael (15) have no sponsors.

In 2012, I also pondered whether I would make it to the priesthood. I loved the idea of serving God as a priest, but my greatest obstacle was the lack of the necessary funds to make my dream come true. By divine providence, I met Fr. Jerry Herda, an American priest visiting Nkokonjeru parish and shared with him my challenges. He made a donation to my seminary education and introduced me to Mr. Christopher Hoar, founder and president of CARITAS Catholic child sponsorship programs, who became my sponsor under the Sponsor a Seminarian program.

Seminary formation takes time and calls for numerous requirements. With the help of Mr. Christopher Hoar, I have been able to pay the seminary tuition and to acquire all the necessary requirements of the seminary. As I begin the last leg of the eight years of major seminary formation, I thank God who has brought me this far – not forgetting the CARITAS programme, and in a special way Mr. Christopher without whose assistance it would have been very hard for me to reach this far. 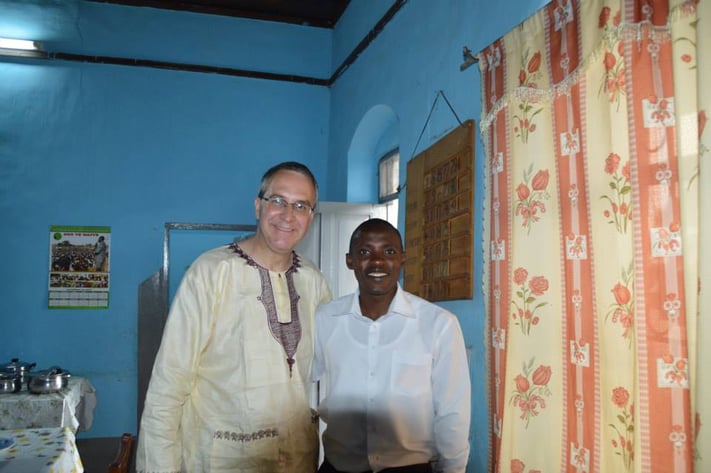 With my mentor, Fr. Jerry Herda.

One formator in one of the seminaries south of the Sahara is remembered for his common saying “No money! No vocation!” In reality that is true for many Ugandan young boys and men. Many have the desire to serve the Lord, but no money to enable them join the Seminary. On several occasions, I have discussed with many young boys the possibility of joining the seminary, but they have always expressed their fear of lack of funds.

I have in mind a story of a young man called Vincent, a Seminarian who has just concluded his Minor Seminary formation and has recently been admitted to the Major Seminary. His father is in prison and the mother is a peasant. He lives in a family of six children all still in school. Vincent always ponders on how he can make his childhood dream come true.

Many young men share similar troubles like Vincent. The desire to serve the Lord as a priest is there. But the means to make it to the altar are lacking. But with the help of well-wishers their dream to serve the Lord will come true.

On Sunday, July 31, 2016, I acheived another milestone on my journey to become a priest when I was ordained a deacon. Here I am celebrating this joyous day with loved ones and well wishers.

After ordination, the diocesan Clergy is in the hands of their diocesan bishop. In consultation with their bishop they can serve outside their home diocese. If they are missionaries they serve according to the charism of their congregation.

Without priests the Church would not be able to live the fundamental obedience at the very heart of her existence and her mission, an obedience in response to the command of Christ: “Go therefore and make disciples of all nations.” (Mt 28:19) And “Do this in remembrance of me.” (Lk 22:19).

By faith we know that the Lord’s promise cannot fail. This very promise is the reason and force underlying the church’s rejoicing at the growth and increase of priestly vocations in Uganda today. Everyone is called upon to share complete trust in the unbroken fulfillment of God’s promise; “I am with you always, to the close of the age.” (Mt 28:20)

To find out more about CARITAS' Sponsor a Seminarian program, please click the link below.