On Saturday, September 6, 2014 the girls of Stella Maris returned for the start of another term. The teachers, who always go to their stations in Kampala, Jinja, Mukono, and Gulu, (where they remain all day checking off lists of requirements to clear the girls to return to school on the bus), woke before dawn to board the Stella Maris bus and begin the long journey.

I woke up with them, and it was still pitch black—the air was cold when I threw back the covers and ducked out from under the mosquito netting. The teachers and I climbed the dark hill up to the school, slipping on wet grass and slick, red mud that coats the unpaved road. The sun was only just starting to peek over the horizon as we made our way out of Nkokonjeru, towards Uganda’s capital city, Kampala.

The fall months are the rainy season here in Uganda, and with the rainy season comes nearly impassible roads. The roads in Nkokonjeru are bad enough, but I haven’t left the town since I arrived over a week ago, so I wasn’t prepared for just how dangerous they really are, despite what everyone has told me. Imagine sitting in a bus—the kind used for public transportation, a little old, with a cracked windshield and creaking joints—traveling down dark, narrow dirt roads just as the sun is rising. The roads are slick and afflicted with potholes, and at the bottom of many of the numerous hills in this region where the land seems to undulate like waves, there is a mud puddle. Sometimes six inches deep or more in filthy water, the earth so saturated that it gives way beneath the wheels of passing vehicles, only to quickly fill in around them, trapping them in the mud. Sometimes they get so stuck you can’t push them out, and the passengers have to walk to their destination or risk taking a Boda Boda, which can easily slip and spin out on the slick surface of the road.

It was a three-hour journey to Kampala, with stops along the way to drop teachers off at their stations, or at taxis that would take them there. When we finally arrived it was raining, big heavy drops that smell refreshingly sweet while breathing in air polluted by diesel engines. If there is an ordor to city life in Uganda, it is of fuel and exhaust, a thick, heavy reek that you can’t escape until you make your way into the countryside. And even then it lingers in towns. As you climb the hill to Stella Maris you can notice the air getting sweeter.

There were girls and their families crowding under the balconies of the National Theater (our pickup location), all the girls wearing the signature blue of Stella Maris, toting large suitcases that hold their belongings. Chairs were brought for the teachers, they were given the files for their classes, and parents and children lined up to be cleared for travel to Stella Maris. 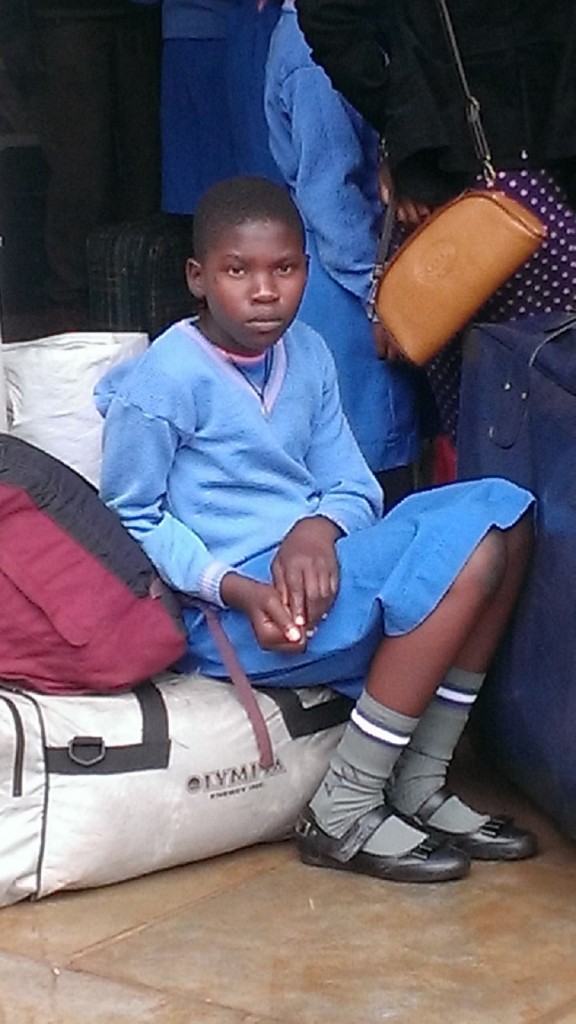 Waiting to board the bus for Stella Maris Primary Boarding School

Students are required to bring their own supplies to school—some things are provided for them, but others they must bring themselves. Clothes, bed sheets, soap, pencils, pens, workbooks, toilet paper, there is quite the list. The teachers check off the list for each child to make sure they have everything required before the children can board the bus and begin the journey back to school. 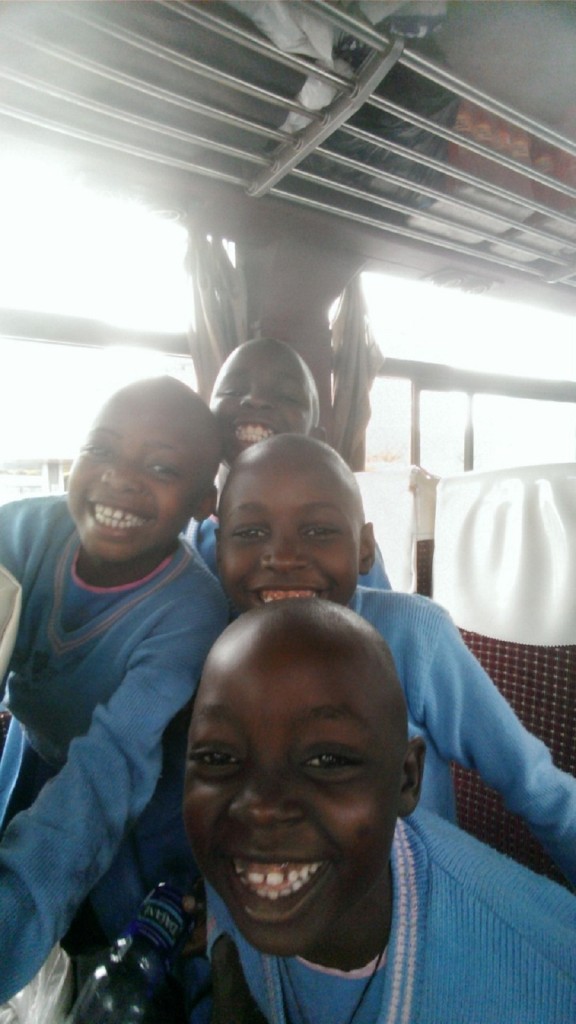 So much fun! The girls were adorable and I loved every minute of it.

I took the first bus back to Stella Maris, which was packed full of girls, and we arrived just a few minutes before 4:00 P.M. We sat eight to a row in many cases, sometimes with the smallest girls sitting on the laps of those who are bigger. On the way home, the little girl next to me was so tired that she fell asleep with her head in my lap, not even waking when we hit the especially muddy places and the bus began to slide and bounce. The girl on my right put her head on my shoulder and slept soundly for most of the way, despite the clamor of the others in the back, shouting and singing happily. At one point the dirt roads were so bad that boxes and bags were falling off the overhead storage and onto the heads of the girls below. The teachers and I, along with some of the older girls, were constantly pushing things back into their places or carrying them so they did not fall on the children. During the rainy season these roads are quite challenging. 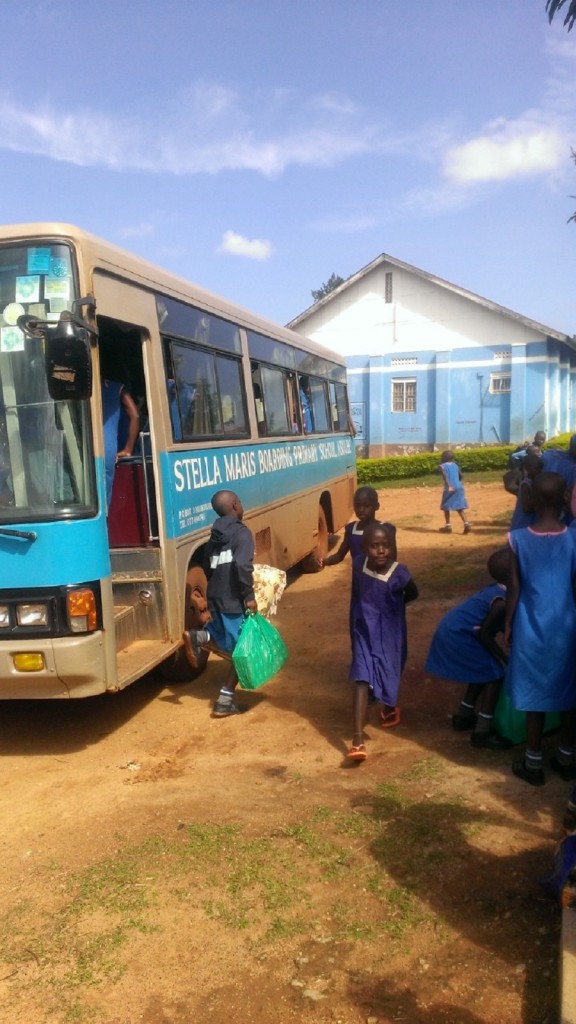 Finally back on campus

When we finally drove up the hill and through the gates of Stella Maris the girls screamed with joy, shouting to a few of the girls who had already arrived.

A stampede of girls all clad in blue ensued, grabbing bags, clambering over seats, some fighting the crowd rushing out of the bus to get back to their seat to grab their things. I’ve never seen a group of children happier to return to school than these girls. Classes begin on Monday, and the girls are busy moving into their dormitories—I can hear their voices floating down the hill.