St. Anthony's is a Catholic nursery school in Nkokonjeru run by the Little Sisters of Saint Francis of Assisi. Part of my job here in Uganda is to help teach the children who attend St. Anthony's — their ages ranging anywhere from three to six or seven-years-old! On Monday, September 8th, the final term of the school year started for all the schools in Uganda and St. Anthony's was no exception. The odd thing about it though, is that in the first week of school, attendance is down at the nursery school. Parents bring older children to school first, and since most families have lots of children, most of those attending St. Anthony's this week are the children who walked by themselves to school in the morning. Next week, I am told, once the older children are settled in school, parents will take the younger ones and we will have full classes again.

On my first day I arrived at school at around nine o’clock in the morning—or, a little after, since I not only got a late start heading towards town, but also because I took a wrong turn in the maze of buildings that make up the convent (St. Anthony’s is located within the convent compound). There were maybe fifteen children, most wearing uniforms, but a few in worn clothes which were becoming threadbare. There are two teachers, but one is absent, and we’re not sure what has become of her, requiring the sisters to shuffle their duties to make up for the absence.

Teacher Grace guides the children at St. Anthony Pre-School through the morning lesson.

Here in Uganda, I’m often called "Muzungu" (white person). I used to just laugh, and sometimes I still do, but now whenever people call me Muzungu, I’ve begun to reply with “Nedda, Ndi Muganda!” (No, I am Ugandan). With the children especially, I’m trying to connect with them as a teacher, not as a Muzungu who is here just to play with them—although that is very fun. So what do the kids call me? My friends here have given me a Ugandan name—Kilabo—which means “Gift,” so they call me “Teacher Kilabo.” When I walk into the classroom they all chorus “Teacher Kilabo!” and at recess they all cling to me, yelling my name until I come, and fight over who gets to hold my hand.

So I walked into the classroom on the first day of school (the classroom is badly in need of repair, with concrete floors, broken windows, creaking doors, an old blackboard, and rickety child-sized tables and chairs), and Teacher Grace, who I am assisting, handed me a piece of chalk and told me it was my turn to teach. I had no idea what to teach—what did they know? What was too hard? How much English do they understand? So I took the piece of chalk and stood in front of fifteen smiling faces, unsure of what to do. Luckily, there are posters all over the walls—colors, letters, numbers, and shapes—so I glanced at the numbers taped to the blackboard and pointed to number one. 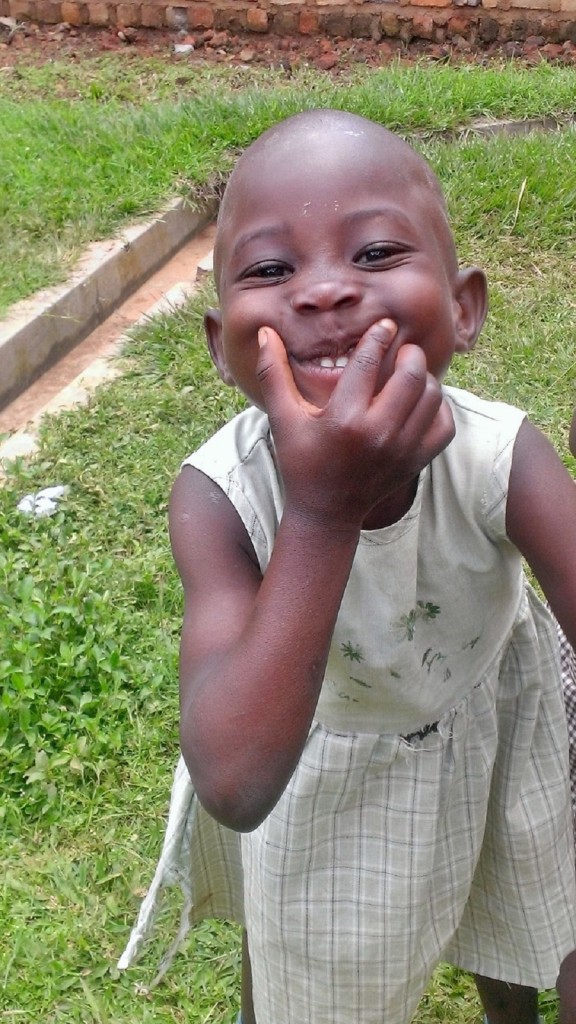 Berna, newly sponsored by Brian and Christine, shows how to put a smile on your face.

“Number one!” they all chorused. So I pointed to another. “Number two!” and on it went, all the way up to ten. The teaching method at St. Anthony’s is geared at providing a good basic foundation for the children when they go to primary school, and also to build their confidence. So the children stand up in front of the class and “teach” pointing to the numbers or letters just as the teacher does.

“Number one,” the child will say, and the whole class will chorus back “Number one!” As a result, they listen very well and do their best to learn the lesson because they know that they will eventually be called to the front to “teach” the rest of the class.

There are several kids in my class who are enrolled in the CARITAS For Children program, but one in particular stands out to me. She’s small, sweet, and has the brightest eyes that crinkle up at the corners when she smiles or laughs. Her name is Berna, and when she first walked in the door it was disheartening to look at her. Her eyes had a vacant expression, and she stared numbly at the table, chewing on an old red marker lid and rocking back and forth while she made soft moaning noises. She had zero ability to focus, staring at the table or random objects around the classroom while the rest of the students were diligently studying their lessons. 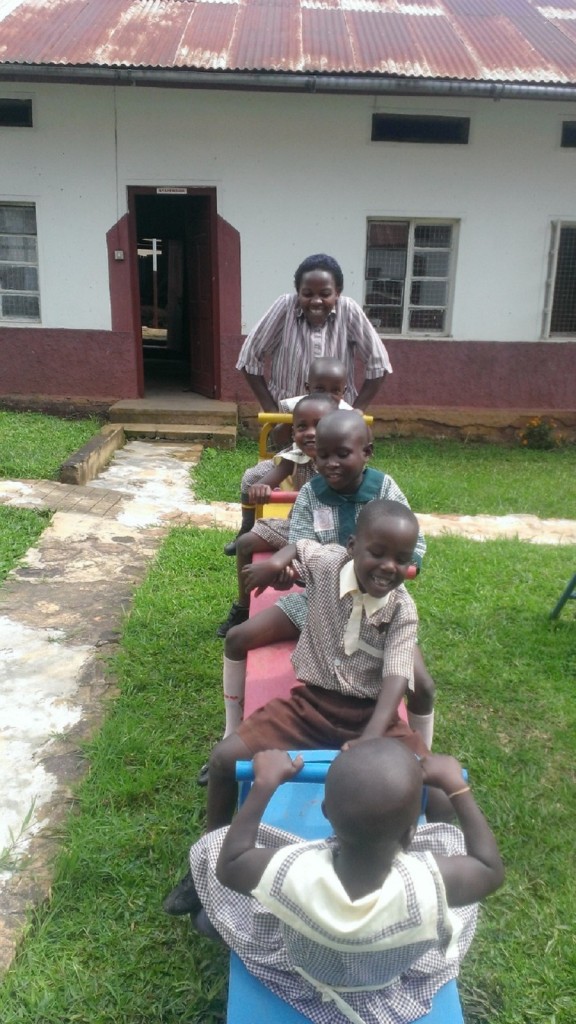 When it came time to break out the exercise books and practice writing letters, I knelt down beside her and took her hand in mine to guide her as she traced the letters. She was writing them backwards or sideways, and whenever you tried to correct her she would just stare blankly at you. So we traced letters again, and again, and again. Every time she succeeded in writing one correctly, I gave her a high-five and a pat on the back. You have to keep encouraging her, telling her “good job!” and celebrate every little victory, and when you do, she flourishes. The blank stare was replaced with laughing, smiling eyes, and the rocking and moaning stopped.

At recess, she tackled me for a hug, wanted to participate in all the games, and played with the other children. All her problems melted away, leaving a bright, happy little girl. The love and care the teachers and Sisters provide, the education, and the food she receives little of at home, all combine to help her grow and thrive in this environment.