I spent the weekend of September 13th-14th at Uganda Martyrs Junior Boys’ School in Namilyango. Run by the Little Sisters of Saint Francis, CARITAS For Children’s Catholic ministry partners, it is where most of the boys in our boarding school program attend, and I was eager to learn more about it, since the boys had not yet returned from break when I stayed there a few weeks ago on my first two nights in Uganda. Sr. Immaculate, CARITAS For Children’s Program Director in Uganda, is the head-teacher at Uganda Martyrs (and also one of the kindest and most capable women I have ever met), and I was able to witness first hand her incredible leadership of these young boys. 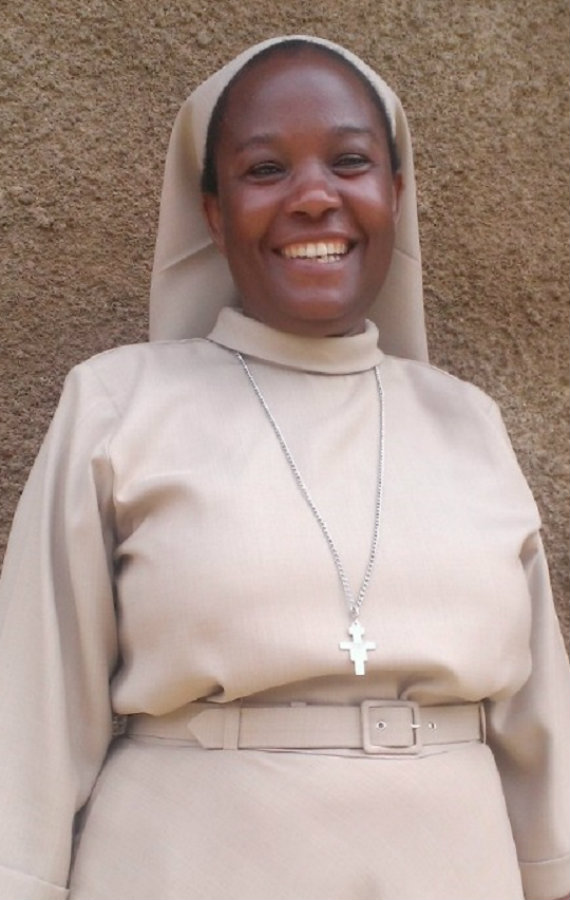 There are 1,100 boys at Uganda Martyrs, P1 through P7 (grades one through seven), all wearing the signature maroon uniform. Being young boys, some decided to unbutton their shirts or take them off altogether in the mid-day heat, displaying the rosaries that many of them wear around their necks. I walked through the compound on Saturday evening, taking pictures of some of the boys, and stopping to talk with them—almost everyone wanted to stop, shake my hand, and say, “Good evening.” As I was passing the courtyard, some of the upper-class boys were playing soccer (called football here in Uganda), and one of them kicked the ball in my direction.

Playing soccer in the courtyard

I’m not overly talented at soccer, and have a tendency to trip over my own feet, but I managed to pass the ball a few times without falling flat on my face, which was met with smiling faces from the boys. I let them continue the game without me, because they are quite talented and move incredibly fast when chasing the ball—out of my league! But as I continued through the compound I found a group of smaller boys playing with a small ball made out of rolled up plastic bags and secured with string. They were kicking it back and forth, trying to block each other’s passes with as much enthusiasm as the other boys. When I passed they paused to look up and wave. 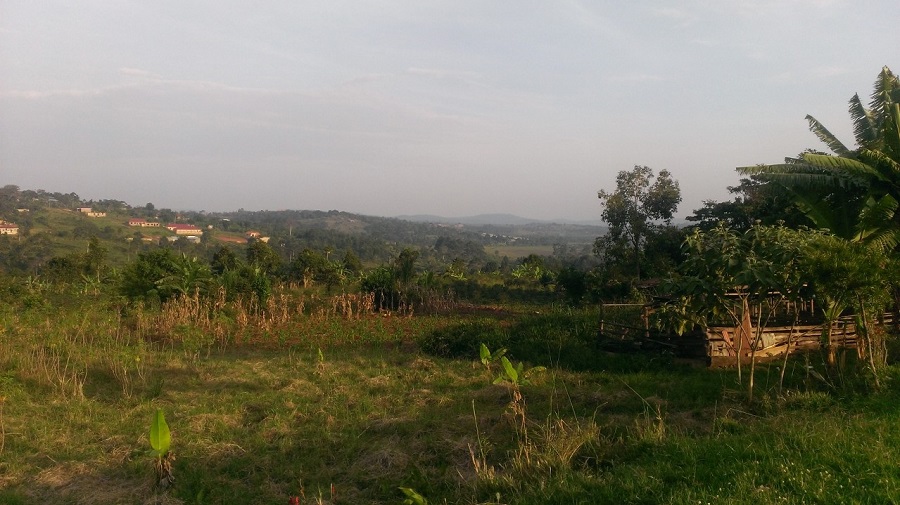 Uganda Martyrs is blessed with an incredible view. The region is very hilly, and if you stand at the edge of the compound, staring through the bars on the gates (which are there not only to keep unauthorized people from entering the grounds, but to make sure none of the young children wander off into the busy streets of Namilyango), you can see the sheer beauty of this country. I wasn’t the only one enjoying the view—one of the small boys stood beside me, standing on tip-toe to see outside of the school compound. He hardly noticed I was there.

On my way back to the convent, where I was staying to help Sr. Goretti iron the altar boy tunics for Mass the next morning, I encountered a little boy, probably in P2 or P3 who was crying against the corner of one of the classroom buildings. I jumped up onto the ledge beside him to ask what was wrong, and he showed me a scratch on his arm that he had probably sustained while playing ball with the other boys. I gave him a hug and wiped away his tears. Apparently, that was all he had wanted, because he promptly dried his eyes and ran back to his friends to continue their game, ignoring their teasing. 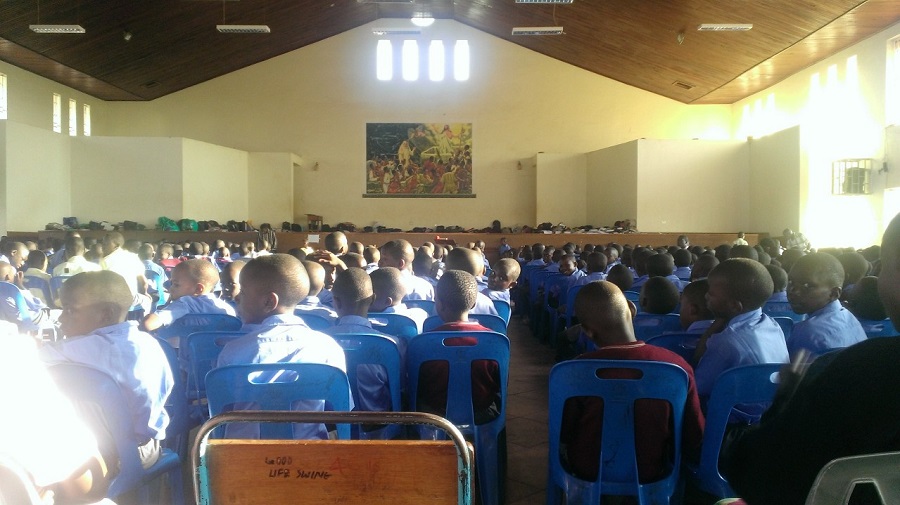 Sunday morning meant Mass at 8:00 a.m. There were 1,100 boys crammed into the Mother Kevin Memorial Hall, listening attentively as Father began the Mass. The layout of the Mass is the same as it is in the U.S. due to the universal nature of the Catholic faith, but on this particular Sunday, Mass went on for almost two hours. The homily is what I would describe as interactive, lasting more than 45 minutes as Father pulled boys from their seats to answer questions. Here is another place where I see the importance of having indigenous religious as our ministry partners. Good behavior is modeled for these boys by Sr. Immaculate, who they both love and respect, and by the teachers, regardless of their personal religion. The teachers sit mostly in the back, with a few scattered among the rows of boys, dressed respectfully and participating in the Mass. Father plays a hugely important role, involving them in his homily to ensure they are engaged as he teaches them important lessons. He told us a story at the end of his homily that I really enjoyed, because I think it demonstrates some of the values this school instills in its pupils.

There were three men traveling through Uganda, heading toward Jinja and the River Nile, all three carrying these immensely long and heavy crosses. As they walked along under the blistering sun, the first man grew tired and called for his companions to stop.

“This is too heavy!” the first man exclaimed. “I think God has made a mistake in giving me this heavy cross—it’s too big of a burden for me to carry.”

“God gave you your cross to carry, you shouldn’t put it down,” his companions warned, but the first man ignored them and put down his cross, leaving it on a hillside before continuing on his way.

It wasn’t long before the second man also grew tired. He knew he shouldn’t put down his cross, but it was so very heavy he didn’t think he could carry it any further.

“This is too heavy!” the second man said. “Maybe if I just cut off a little it will be easier to bear.”

“Don’t do it,” the third man said, but his companion ignored him. So the second man cut off part of his cross and they continued on their way. But the cross was still heavy, so as they went he kept cutting off more and more until all he had left was a small section of cross he could carry in just one hand.

Finally they reached the River Nile, which they intended to cross, and stopped on its banks staring at the distant shore. The first man, who had nothing, had no way to get across the Nile, and instead stood helplessly beside the river, wondering if he should try to swim, even though he didn’t know how. The second man gleefully threw his small piece of cross onto the opposite bank, only to realize once he had done so that he still had no way to get to the other side. But the third man, who had been faithfully carrying his cross the whole way, set it down. It was so long that it crossed the River Nile like a bridge and he walked carefully over to the other side, where he picked up his cross and continued on his way.

The moral of the story, Father explained, is that you have to carry the cross you are given in its entirety, not setting it down or carrying only part—there will come a time when you will need it and the grace God has given you, and if you were like the first two men, you will find yourself in trouble. It’s a good lesson for these boys, who will all encounter hardship in their lives, even if they have not already done so. Hopefully they will remember it when it matters most.

After Mass the boys stacked up the blue plastic chairs and carried out the benches, flooding through the doors in one massive wave toward the dining hall to eat breakfast. 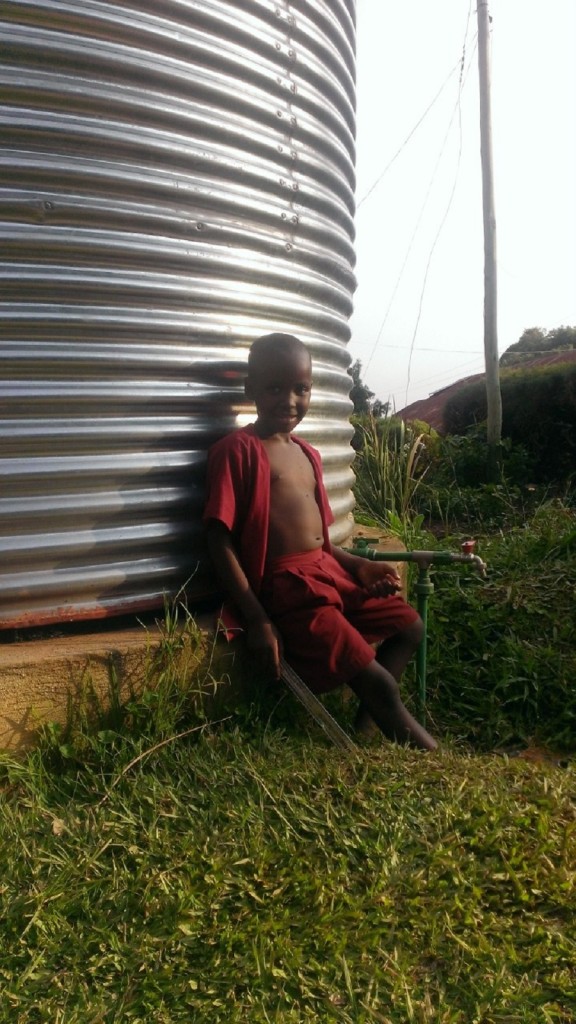 One of the boys