When I was a kid, I used to love playing with water in the sink. There were so many questions to answer – what happens to a Kleenex when it gets wet? Does hot water taste the same as cold water? Can my doll swim? As I played, my mother certainly had to worry about the sink overflowing, but she never had to worry about whether I would get typhoid or cholera from the water.

For many mothers in Uganda, however, these diseases are a very real concern. Not only do their families lack access to sinks; they lack access to clean water in general. Instead of spending seconds turning on a faucet, they spend hours walking to streams, wells, and boreholes, where they gather water for everything from washing clothes to boiling potatoes. To make the water safe to drink, families – mainly children – spend additional time gathering firewood to boil the water. 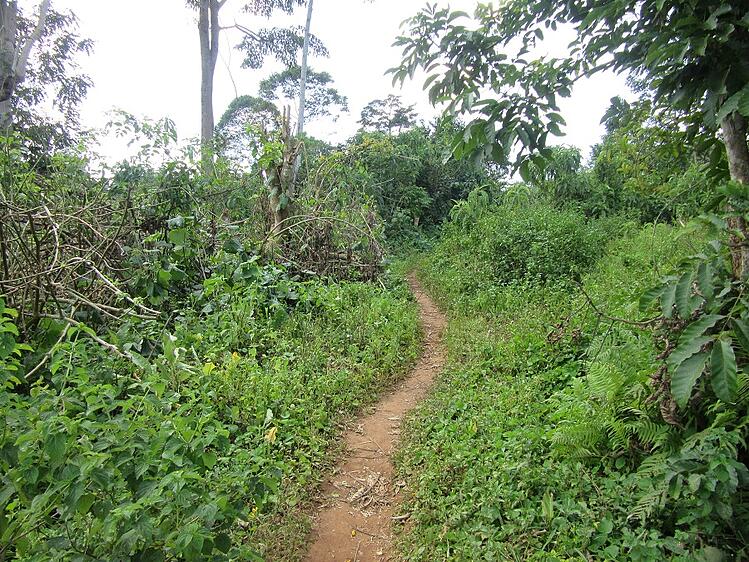 To access the well, students walk along this narrow path, which slopes downhill from the school. The walk to the well takes about fifteen minutes each way, so students generally take 30-40 minutes to fetch a jerry can of water. At the start of each school day, students are sent to fetch water, which means that, instead of beginning at 8:00 a.m., classes usually do not begin until 8:40 a.m.

Last week, I visited St. Paul’s Boys School where several students in CARITAS child sponsorship programs attend. I went to see one of the wells used by many families, staff and students from the school as their source for water. The day was hot and dusty – more than once, my guides, who included two sixth grade students and a teacher, told me to watch out for snakes basking in the midday sun.

After about fifteen minutes of walking through corn fields and over hills, we arrived at a small stream of water that formed a pool among a few rocks at the edge of a clearing. The water was dirty-looking and shallow – it hardly looked like enough for dozens of students and families.

The "well" is more or less a muddy little river that bubbles out from between a few rocks.

Using a small jerry can, my guides filled up their larger jerry can scoop by scoop. When it was full, one of the students hoisted it onto his head and began the dusty walk to school. Fifteen minutes later, after trudging back over hills and through cornfields, he reached the kitchen, where he left the water next to a smoke-filled room to be boiled.

Each day, the students at St. Paul’s Boys School repeat this ritual dozens of times, just to keep the school supplied with water to drink and wash. Families in the area do the same – gathering dirty water in dirty jerry cans, and then gathering firewood to boil it before it can be safely consumed. 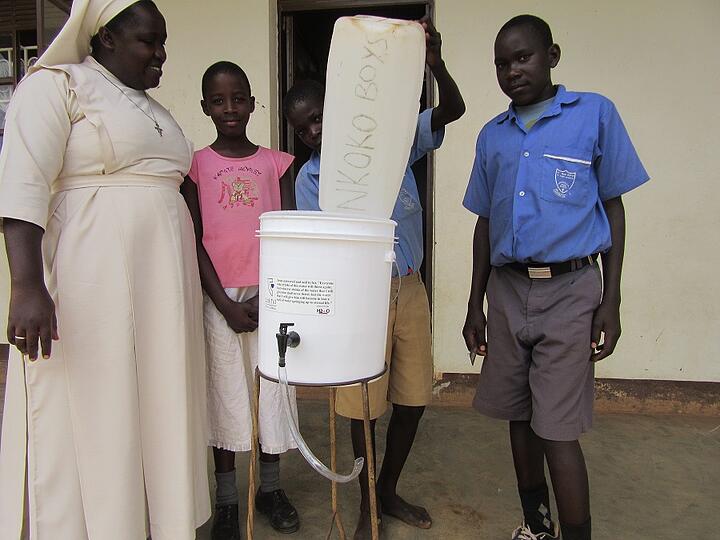 St. Paul's staff and students with their new H2MicrO filter.

Yet, thanks to the generosity of many CARITAS sponsors and donors, clean water is slowly becoming more accessible to students and their families in Nkokonjeru. This change is the result of dozens of H2MicrO water filters, which have been distributed to households and schools, like St. Paul’s, in the area. The filters make a difference in the lives of students and families by giving them quicker, easier access to clean water in their schools and homes. Water that passes through the filters, which sit in simple five-gallon buckets, is safe to drink – no firewood or boiling required.

Although the filters are not exactly a stand in for the sinks I played in as a child, by providing easier access to clean, drinkable water, they are helping reduce the number of mothers who have to worry about diseases like typhoid and cholera, while increasing the number of children who have enough spare time to play.